This is part of the reason I share my story.

While this isn’t the full reason I share my story this is part of it. The last couple of years since my dad and son have passed I’ve learned so much, a lot of it hurts, but, even hearing about “who I am” from people who don’t even know me. Sad reality is this person could walk up to me right now and gut me and I’d have no idea who she even was... now even though I don’t owe anyone anything let me explain; there are only a FEW of these people; I am met daily with love, support, truth and people that truly know me and that have been there MY WHOLE LIFE that I would know if they walked up to me.. those are the ones who matter; but, since this person decided to attack me publicly on MY OWN POST.. I felt like I could elaborate a little on the “lies”.

This didn’t just start, I just masked it because that’s what we’ve always done. No matter what happen we hid it.. I am not hiding anymore and the more you learn the more you will know why! After dad died and the same lies were still being told and something clicked. Then it became new stuff and more lies and it just keep dragging to different stuff and excuses that we’re lies and butt dials where I heard more lies..

Now let me remind you; most of you already know, sure some of you may not, but, this all started a couple of years ago, and I just hid it because I was still believing the lies and it continued escalating to the post I made about a remark made directly to my children; funny thing is there was even more lies to drag it on and try to mask it too.. but I am not sitting back and allowing my children or my self anymore damage over the lies.. especially threats like this;

“I am a law enforcement officer, I carry my weapon and will take care of what’s needed.
(Reference the police report)

....  that I made a statement on because truthfully with things I’ve been told we have been living in fear and I’ve made it know to the “REAL LAW ENFORCEMENT”.  But again there is more to this story.. but while we are here; I am a rude nasty individual that treats my mom & dead dad like shit. Yet I don’t even know this person. Never once do I remember her coming to my house or being in any presence of my life.. never once was she there when “911” was called. Never once was she there when my dad or mom was in the hospital or to my knowledge even at my dads service when he died and dang sure wasn’t there when I laid on a air bed in my moms livingroom up until my water broke and my son died.. so who are you again!?? Oh wait. My mom dates a black man!? That’s news to me! Who knows this to be the truth because; I can sure tag some people on this to the truth we’ve been told about said black man.. just wait... there is more to this story too and I definitely don’t mind sharing it since we are here.

Prejudice: WOW. Ok. I’ll take that one with the rest of your nasty hate comment. Straight to the “bank” and watch it bounce too.

Ohhh God don’t like ugly. My “friend” who knows me so well.. and knows my life much better than I apparently; what do you consider your message to me; of someone you don’t even know?? Where have you been my whole life?? Hiding in a closet or just “hearing” what you were fed? 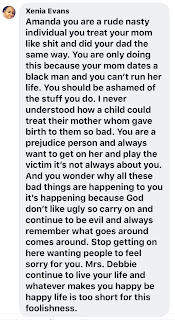 I am done with the lies. I am done with the “preying”; I covered a lot over the years dealing with my family; I’m not covering anymore.. and yes what “goes around, comes around” 🙄 seems to me some of them lies are coming back around like a freight train headed to the light. I’ve pulled the duct tape off and I’m shaking the chains... it hurts but it’s so freeing too because I don’t feel like my life is a lie.. breaking generational curses. Because I will also add my own mother came on trying to defend him that “this happened at her house & it was not what happened” until I threw in the police report & she said to me she posted to try to not make it worse so she could go out gracefully.” Lies…just more lies.. you don’t need a excuse to go gracefully from anyone especially someone who threatens your child & grandchildren or attacks your child like this disgusting post above…

While some say the past is the past leave it there.. well my past is facing me like demons head on and I’ll stomp everyone of them back to hell where they belong! 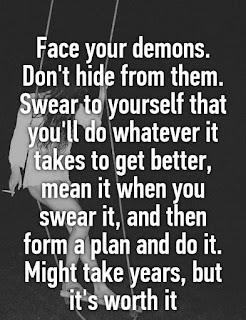