Yes. Toooooo good not to share. I have literally fallen away from church because of how it’s been crammed down my throat by wicked people in a negative way... I’ve just started getting involved again and I’m not going to lie it’s hard... I don’t care how loud you blast your tv preacher, say amen, fake your prayers or fake speaking in tongues.. or put on the “god” story.. I see a wolf in sheep’s clothing, a hypocrite, a liar, manipulator & so much more... judging everyone & have seen & heard it all my life. It makes me cringe!!! I know the lies that’s been told, I’ve been a part of them because I had no choice! I wore that mask so I didn’t have my head chopped off in tribulation like I was told I would for being disobedient and not sticking to what I was told to do or say.. 🤮 people don’t know my story but I know the fruit of that tree.. #RottenFruit now I’m trying to find my way again and it’s hard.... Ughhhh.

— when I was a very young girl I was made to watch a tribulation video of beheadings and people left behind.. I am forever scarred by it.. not to mention shortly after anytime I was not the “perfect child” who covered or did just what I was expected to do, I was reminded of said movie.. even to the point I remember the loud radio and no lights like the rapture had taken place and I was left there to die or take the mark of the beast!!!!  That part of my story will be told soon, but it’s sickening to hear the lies today, yet the very next minute speaking in tongues and praying like some big christian.. I seriously want no part of that!!! It’s disgusting to me!!!! It’s not my walk but the manipulation and deception that comes with it... y’all.

I have a story and I have a hard time sharing it because I’ve had to hide it for so long and I still to this day here..

Sit down and shut up.
You don’t have a voice.
No one cares what you have to say.
Keep stirring the pot.
Your papa would beat the s”@$ out of you if he were here. 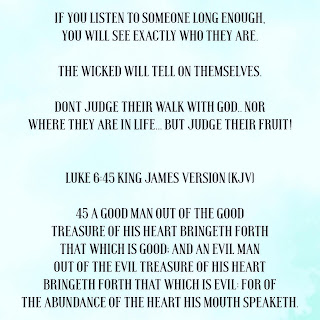