I caved for a couple of days. More on that soon... You know it’s hard being sick and “your womb donor“ genuinely acting like she cares for the first time in oh years? And you think she finally gets the truth she’s been dealt..(Guess I was like the Sr.Spot and it was just to get information on my moves, to take back, I wasn’t that stupid tho!) my next move won’t slide as easy as that pool stick.)

And I can tell you, a narcissist has a way to play that game they are good at.. Especially over the last 2, I’ve seen it a lot, Since that POS came around strong...after his divorce with a beautiful sweet friend of mine whom I love and so thankful she is in my life, it has definitely brought light to a lot, but it got way worse after he come along with the threats, bullying and all, it just shows how bad he’s out to destroy her family and she allows it, because any attention she gets, she will take, then again she allowed a lot over the years..... even allowed my dad to lay in his bed depressed and drugged up until he finally overdosed and died.. and I have my own reason for this.. but that’s also for another blog....  and I’m sure she would be overjoyed if I was gone too.. she’s even said it. What mother does this?! She would get even more sympathy tho, victimhood for her, because you know, her parents, her husband, her grandchild (that she wasn’t even there for!!!) & her only child.. oh wow.. that would lead to a whole lot of sympathy.. 🙄 I guess her contract would be over for everyone then.. she’s been that caregiver all her life now it’s time to live for her. Forget she has grandchildren & a daughter but then again, we have NOTHING to offer her, we don’t have life insurance or settlements or stashed away money that she benefits from so she can just put on a show of how much she cares for us around the ones who love us and then tell the rest she’s a victim, we use her, steal from her and harass her... playing both sides just like MANY have said... problem is this has been a card all her life.. between so many, even my dad and I, but she will turn that around too..

Then, She’s going to let her friend tell me I killed dad.. yea ok.. I wasn’t there with him all the time, I had pulled way back because of his drug use that she wouldn’t help get him help for, even when he was on life support in the hospital I tried to get him help, nope. The many times he was at Camden and they said he was full of medication, she lied, she would tell them she monitored all his medication.. well if that was so... how is he in the ground of an overdose and his body be a “soup kitchen of medication. But you know she can go live her life, do all the things that dad can’t and honestly never really did especially the last YEARSSSSSSS. Even my boys remember the lies when dad would call and want to do something with them on his good days and she would throw a fit! That’s why my boys really have nothing to do with her now, because they remember, and both have even said “mama it wasn’t papa like she said”. But you know like she said, her contact with him is over he’s dead. So she can just take her rings off and move on, yep she sure can, and dad should have had that option too, but he doesn’t and his daughter & grandchildren’s contract isn’t over. He was never a contract to us. But her contract with him and her family can be over. His WRONGFUL DEAD can lay on her “monitored medication” and knowing he was laying in the bed dying too! That’s how I & many others feel about it! Sadly with the threats she would rather I be in a “body bag” too but she won’t get the opportunity to put on a show of her missing & loving me.. I know she has a few pictures of “her family” on FB but FB is fake! The truth is in the recordings... the actions... and from the lies, the actions & the fake... this is the last time I saw my dad & my children saw their papa: laying right here in this casket. 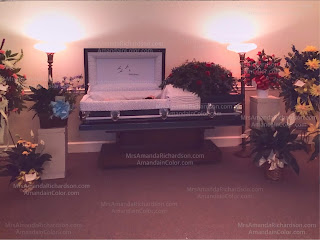 Looking at his pictures in his bed of him dead & then them bringing his lifeless body through the house for the last time, loading him into the van haunt me..

This is where monitored medication leads..... 😑
This is where the words “I don’t want to live anymore” and no one gets you help leads! 😑
(Oh so you ask, why I didn’t do more, oh I did. Trust me I did. Every 911 call, every call to the sheriff, every call to my police friends, every hospital visit I was informed of, as a matter of fact, there came a point I wasn’t even informed of them until he was home!)

......but the lies. The cover ups. You will soon learn!!!!!! This story doesn’t end 6feet under at St.Marys Cemetery.it doesn’t end with this grave: 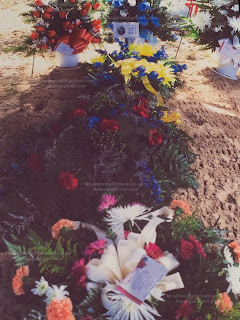 I had already started the work of my dad when our lives were threatened, and we were bullied, so it was kinda put on hold for me to deal with the other, mainly so my children don’t end up in “bodybags” too. But I promise you dad you will not be forgotten or my contract with you doesn’t end here!

&& I am not saying our relationship was perfect I pulled away from him over the drugs and I can tell you, now looking back at the lies, 20/20 tells me that the lies were not all him, I can’t say that all of them were not, but knowing what I know now, it sheds way more light to the lies, she was just more believable at the time..

Yes he did some things that hurt. I was pretty angry with him for some things that I’ll share eventually, but knowing what I know now I can’t say I blame him! She really did push him over the edge like he said many times! He would leave and be gone for days just to get away! He would even come sleep at my house and hide.. now I know why!

I am disgusted. Listening to some of his voice recordings I can hear how disgusted he was and my hands were tied with the lies... even the drug deal that my son was involved in with him.. & the one at Winn-Dixie... where our sheriff friend approached him... ironically both with HER FRIENDS... ugh. And now “her friend” again gets to destroy her daughter and grandchildren... it’s a pattern... one that she doesn’t do anything about... but the first one ended with the closing of a casket on my dad.. or did it???? Nope. I am going to seek justice for my dad.. one way or another!!! Especially since I was told I killed him... I will prove my innocence—— Them stories are coming but had I only known then.. what I know now...

—- more to this soon! This is draining for me because it makes me so sick that I ever believed the lies..