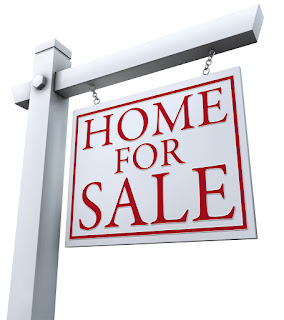 It’s about time! I could not be happier! I’m actually getting away from here without being put in the body bags my family & I was threatened with!! (& you can hear that soon too!!) My parasite of egg donor has caused so much damage & doesn’t even care, the blood on her hands is thick. She wants my blood on her hands so bad & she does have some of it.. matter of fact more than I’d like to admit, but she won’t hold my destroyed heart as a trophy & get sympathy at my death!

She’s lied on everyone to everyone so much & continues to do so and live in her lies, I can not wait to be done with her completely so she can’t destroy me or my children anymore. She will never do anything she’s promised and I’m tired of the manipulation of it. I can almost post all of the evidence & evil Ive been through, there will be a lot of mouths dropped! But it won’t matter to me I’ve hid the crap with bribes, manipulation & threats long enough. It’s been a battle of the mind & it’s almost over..  The other day I spoke with her and she was begging me what she needed to do to get me to stop... . Ummm NOTHING! Absolutely FREAKING NOTHING I have been manipulated & abused long enough & I have 2 graves I visit because of all the lies & games! I will see this through! I don’t care what cost it comes with.. it can’t come at a greater cost than the premature life of my dad and son unless one of my other children are killed with the weapon Artie Jones threatened them with the the name of him being in law enforcement: (more on that too)

sadly this has always worked because I just wanted my mother to love me.. so I would stop and shut up over anything no matter how wrong or bad it was because I knew she would not love me, but the truth is.. she does not love me. Clearly. Have you seen the rest of my blog? My FB posts? My court stuff? Yea let’s not! But while she’s asking me what it will take for me to stop. NOTHING. You don’t hold that kind of power over me anymore...  maybe before the death of my dad and son, maybe before I learned who you really were, maybe before you told everyone I stole your food stamps, maybe before I learned all your lies.... but now.. Beg all you want! Keep all your conditional love! This is the same crap I heard on all my attempts to get my dad help. Amanda stop. Amanda what is it going to take for you to stop. Amanda I’m working on it. Amanda give me time. Amanda he’s on a regimen. Amanda I’m controlling his medication. Yea.. and guess what.. AMANDA HES DEAD!!!


& while we are here: I’ve had several calls about this all being me with the court.
As of now yes it’s all me; BUT our court date in October where she went and sat with my abuser; that was all HIM, I will soon be posting all the details, paperwork & recordings as soon as they are cleared so you can all see the truth behind them lies.. but I can post this for now..

Clearly: I am the defendant: meaning HE TOOK ME to court. For what you may ask; because I called 911 on him MULTIPLE times. Them reports will be attached soon too! && the video lies with them.. soo super disgusting to listen to the lies... but it just shows the truth and I have nothing to hide. 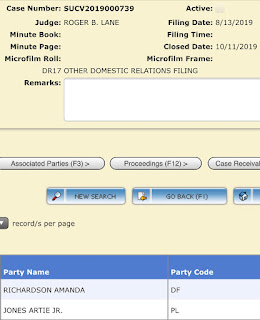 Here is the court order: he wanted a restraining order on me: but it got turned and he also was issued one because I came with evidence of the hell he has caused me and my family; even attacking me in the court room when I asked if my husband could sit with me due to my anxiety & PTSD, he replied, only if her mom can sit with me for mine. Yea.. oh there was a court reporter as you can clearly see that ONLY I PAID FOR! Below you can see the truth to the lies she’s told & I have more too! I refuse to lay down anymore!! My family has suffered enough. 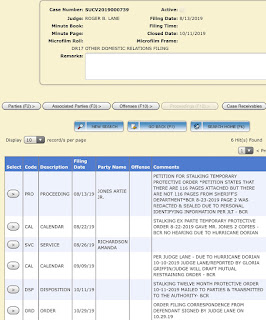 Speaking of suffering: I did text her this today so I’ll share it.
(I’ll share any and all of my texts to her; even when I told her she ruined my life, I have nothing to hide! I’m done hiding & rolling on her hamster wheel, waiting for her to get help like she’s promised so many times before! I heard them same promises right up until June 1, 2015-
Your dad died. In bed alone. Drugged. I want actions no more words. 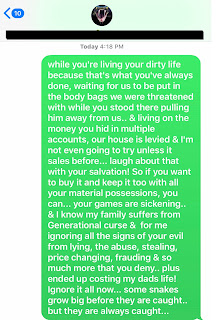 “While you're living your dirty life because that's what you've always done, waiting for us to be put in the body bags we were threatened with while you stood there pulling him away from us.. & living on the money you hid in multiple accounts, our house is levied & I'm not even going to try unless it sales before... laugh about that with your salvation! So if you want to buy it and keep it too with all your material possessions, you can... your games are sickening.. & I know my family suffers from Generational curse &  for me ignoring all the signs of your evil from lying, the abuse, stealing, price changing, frauding & so much more that you deny.. plus ended up costing my dads life! Ignore it all now... some snakes grow big before they are caught.. but they are always caught...“

As I heard her “God bless you” crap. Ha. Yea ok. So we are up on house levie right now & we are barely making it, & going to lose every and I feel like the generational curse over me is strong. I know God showed me so much & I was just to screwed up to put it all together. As you learn more you will understand too.. but for now.. it’s where we are.. and at any day I expect what my dad said would always be mine to be stripped away & that’s ok, I know God will provide food for my family. There is absolutely no way we can pay this & I’m not even going to worry anymore. We have a family plan & I am laying everything else at Gods feet.. Maybe this is His plan to get us away from the lies & evil we’ve endured... I just know His ways are better... He promised me He would take care of me, even when my “egg donor” forsakes me. Psalms 27:10 & just have to trust Him.. and I’ve been so clouded by her, her ways, lies & actions, the honor your mother crap no matter what I do to you... I lost sight of His promises... them days are over! OVER... OVERRRR.. He will sit right with me in court again just like He did Oct 10th. & I’ll continue to bring truth to it all.. I am an open book! 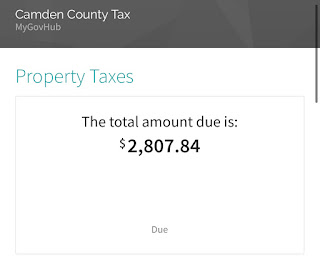 For now I’ll be selling off stuff to afford my medication & Drs. Visits & provide for my family the best I can.. because my truth will come with a cost from her.. I just know it. I will suffer the wrath at some point.. it hasn’t happened yet and it gives me some sort of hope she will change but I know deep down that won’t ever happen & when I share more.. you will see why.... so for now we are doing what we have to even selling our house, unless God makes a way somewhere else.. Pray for our family as more legal stuff comes & I deal with the abuse, CPTSD, anxiety & my health that had suffered... especially seeing my dads dead overdosed body & feeling my sons heart stop while I held him so close..