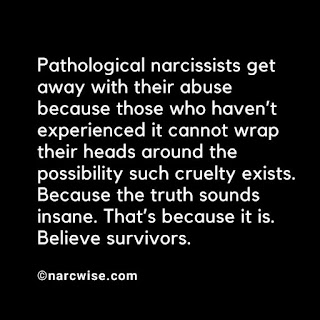 && they get away with it because people who know the truth are scared they will hurt their feelings!!
Who cares!! Do you think she cares about YOUR FEELINGS!!! How could she when she doesn’t even care about her own child’s!!! Well live in denial and blinded by her lies of you want! I am not staying in her sit down and shut up cup anymore! I am not waiting while she “gets away from him gracefully” or “give her time to get away” “She’s working on it” anymore! I’m done with her Narcissist control, abuse, lies, fake pleas so she can continue to do what fits her no matter who it hurts.. I don’t care what politicians she’s rubbing hips with... bring it! She’s good at what she does and she can make a blind man buy glasses convincing him he can see with them.. the convince him to wear them a few days before they work!! Then it’s to late he’s sucked in.. I know the schemes.
I know the fake man voice & fake tears. I know it all.. &&&
All to well...

I’m probably going to step on some toes right here but you know what.... I’ve earned the right to say how I feel! YOU HAVE NOT been in my shoes! I have covered and taken crap for far to long at the expense of my health, my sons life & my children being hurt.. If you can not stand up to my “incubator” for whar she’s done, her lies & what she’s allowed that evil St Marys City Councilman to do to HER family because you’re afraid of “hurting her feelings” then don’t you shed a freaking tear when I’m dead because you didn’t care about me! I don’t care about HER FEELINGS! I care about the body bag threat & abuse me and my family have suffered! WRONG IS WRONG! So go ahead and pet her and believe her lies if you want to but YOU all have heard and read the truth and you can obtain the police reports, I have the court docs you can see & the voice recordings have been shared too!! So keep worrying about her feelings because I will call it all out as I see it and I don’t need any family who isn’t able to stand up to her lies and bull crap!! You know my dad died of an over dose from her lies because everyone was to afraid she might get hurt if someone called her out... so when her DAUGHTER IS DEAD TO MAYBE YOU WILL CALL HER OUT FINALLY!! Stop SUGER COATING THEIR EVIL!! Do you think she cares about YOUR FEELINGS??? HECK NO!! And if the tables were turned she would absolutely not hold the same   loyalty to you!! Are you SERIOUS?!! She doesn’t even care about her OWN FLESH AND BLOOD THE DAUGHTER SHE BIRTHED!!!!! What makes you think you are special to her?? Her words??? Guess what!! She told me them same words as she stabbed my heart out and watched my have a NERVOUS BREAK DOWN AND BE LOADED IN AN AMBULANCE IN HER FRONT YARD!!!!!! WAKE UP!!!! I may lose some people over this but it is what it is!!! I’m tired of hearing, poor her!! Yea poor her alright!! She stood by while I’ve been abused and done absolutely NOTHING!!! I’m over it. Somedays I would rather be dead than walk this earth with her!!! & while I’m here, she’s just as guilty as my abuser for not doing anything about it and standing up for them, anyone who can condone the abuse and not speak up for it, is just as guilty as the abuser!!! 💥