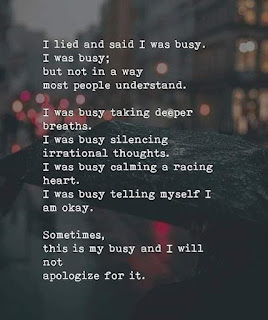 I’ve really been struggling with my mental, emotional & physical health. My body aches.. I am in intense therapy to overcome the trauma and abuse. I don’t know where I’m headed right now, but every breath has been hard & hurts. The abuse & trauma at the hands of the woman who birthed me has about buried me alive & it’s exhausting digging myself out. I know now why my dad said the things he did, wrote the letter he did and laid down to die… The PTSD, depression & anxiety of it all has about taken me out..

+I am working hard on getting better for my boys, but, I have also shut so many other people out… because I’m just not capable of being a friend.. I have a hard time accepting any ones love when my mother can tell me she loves me; yet she’s abused me & watched me be abused, the love word takes a whole new meaning..

+I even struggle with being a mom.. I’m broken damaged & wore out.. in all areas of life.. and I’m tired of hiding & faking it like I have had to my entire life.. 💔

+unless you know what it’s like to be abandoned & abused at the hands of the person who birthed you, tells you they love you, while you were looking deep into her eyes for comfort & protection, only to watch her wrap razor wire around your neck, stabbing knives in your back & then see her sitting with your abuser in court & lying to protect the ones who have hurt you hiding behind “god” while doing it..

+ being told by her that same god she hides behind took my child from me because I’m a bad person, while I looked down at the lifeless body of my child & now visit the grave of where my baby lays…

+you wouldn’t understand how dark it is.. I am unpacking 43 years of abuse & lies… & the unfair and premature deaths of my dad & son… trying to breathe for 2 boys who have suffered and lost so much because I was “to busy” honoring a woman who programmed me into who she needed to keep her fake up, believing that was my purpose in life to get to heaven and not “burn in a lake of fire or watch my children get their heads cut off for not obeying her, and I was a horrible person headed straight to hell if I ever “spoke out”…  even when I was hospitalized; they were coming to get me she demanded she took me so she could program me more on what I was allowed to say and not allowed to say.. no one knows these things.. she would pound in my head how evil & full of the devil I am & I’ve ruined my children, how horrible and sick I am.. even allowing her “friend” to spew this venom at me and her telling me to kill myself..

+ Her standing by pretty much in agreement that I killed my dad & child too… yet she walks around claiming the victim with “god on her side”… like she’s done nothing.. while her hands flood blood off of them; after all the hell she’s wrecked & the lives she’s destroyed.. & watched be destroyed..

::: yes I have a hard time with the “Trust God” messages or prayer.. with the evil and abuse I’ve suffered.. while she’s hid behind “god” to justify her actions & she’s such a “godly” woman sitting on a pew on Sunday..

*you’ve only heard a small portion of my story.. I am determined to break every lie & generational curse she’s passed to my family & expose her for the true evil she is.. even if it kills me & I end up in the body bags she allowed my family to be threatened with.. that would make her happy I’m sure.. what a sick feeling to think anyone especially a mother, could justify their husband and only child, both being taken out by body bags.. at her very hands.. and hide behind “god” & a smoke screen so thick; ultimately getting away with murder… may she rot some day as the monster she is.. I’ve not only feared make believe monsters: I lived with one who I cried out for her to help me, save me, hold me, love me, hug me, as she pushed my head under the water & walked away hoping I’d drown while she turned a blind eye like she didn’t see or know a thing…

………just like my dad died.. because our death hides her lies & demons, then she can repaint the fence white & clean up the haunted house.. bleaching all the blood away from the human eye..  it will only be her story left.. no one else will be here… her husband and only daughter will be gone.. & the walls can’t talk…

Keep believing all her lies.. the recordings, police reports & letters don’t lie. No matter how she spins it.. her lies will catch up to her; just as they already are..

*The ones who stand with, protect or lie for the abuser, You are just as guilty of the abuse. Don’t let your hands be bloody or be accessory in crime….