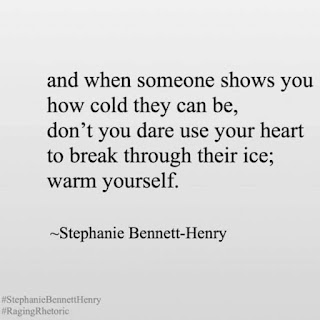 She has shown how cold she can be & I’ve used my heart so much all I have is the shattered pieces left….

So I’ve noticed I have several unpublished blogs I am just going to post them with edits to be made later. But this needed to be published now. Some of my “sisters” need this as much as I did. Validation is key when you’re living a life of a narcissistic mother especially when your dad & child are dead as a result..

Sure, dad had a hand in his abuse but his sole caregiver didn’t get the help he needed and enabled him.. which led to a early death and unfortunately justice will probably never be served for that.. then falls the death of my son because I just wanted to be loved & be enough for her & sleeping on her living room floor while I was suppose to be in a bed with my feet propped up.. you see tho.. Sidney Blake didn’t & doesn’t mean anything to her.. it wasn’t her loss… I mean let’s be real… she still has 2 grandchildren (her only grandchildren) here breathing & hasn’t spoken to or seen them in years; & sadly enough allowed them to be threatened with Artie Jones weapon & also body bags… yet she did absolutely nothing to protect them either. So why would she have done anything to protect Sidney Blake.. had he survived she would not be a part of his life either so his death doesn’t effect her one bit. Disgusting huh.

Letting go and moving past it all is hard work; the intense therapy & medication alone has been hard but what’s even harder for me is my children not having grandparents to love them & wondering why they were not enough, although years later they don’t seem to be as bogged down with it as they once where, it’s still gross to me how any grandmother could be ok with her blood being threatened with body bags & told they killed their dad & child, & choose that evil over their own child & grandchildren.. I long for the day she regrets that decision.. she’s lost a lot of time & memories with two amazing boys who she will never ever have the chance to know or be apart of their weddings nor ever have the privilege of meeting what would be her great grandchildren.. & I just couldn’t even imagine not being a part of these two wonderful boys lives, Thank God I don’t have to… because I’ll choose them first always & no one in my circle or life will ever harm them, threaten them or bully them & be apart of my life… I don’t need people like that in my life.. I need my blood. My boys. My heart… before anyone else.. -including my own mother.. who has allowed us to be abused & sat with our abuser in court & still continues to lie & justify some of her actions, especially when certain people are around…

Happy Birthday SidneyBlake!!!!  Right now: 5:08am August 5, 2015. My life was forever changed. Never to be the same again. Not long ago, this very morning, 4 years ago, my body gave out, I had already labored for days, and just couldn’t go on. I found myself laying on a hospital bed in a empty room screaming for someone to help me, no one was there but the nurses heard me, rushed in and told me you needed to be born STAT. I was so scared, they wouldn’t even let me call your dad.. he got a voice mail from the hospital, because he missed the call, and no one else was there to call him, luckily it woke him up and he immediately got on the road, it was an emergency and I had to go to the OR then and I didn’t know the outcome. It all happened so fast. I was rushed across the hall to the OR with a nurse on the bed with me, slid to the operating table and told to breathe deep, all in a matter of minutes of screaming for help. Any help! Anyone! Just someone to save you! I didn’t
Read more

(It’s late & this was a very hard post for me! I will be editing this with some voice recordings, court documents, police reports & more in the very near future so please check back for more details soon!!) to my daddy… thanks for loving me hard when you were in sound mind..without the drugs & I’m sorry I didn’t see through the lies that left so many unanswered questions… at your death. I’m one day closer to seeing you!”) ……….  So after today’s appointment I feel like I need to write this post. As many or probably all of you know at this point my dad is dead. Above you will see the final picture of him on earth. Without life. Laying in his casket. Prematurely. What comes next is a mystery that unfortunately I’m not sure will ever get solved although I still have hope that someday before I take my last breath here I will have the answers I’ve been seeking.. Unfortunately I don’t know for certain if his overdose or as I was told “his body was a drug soup kitchen” was intentio
Read more