I’ll update this soon. Right now it hurts to breath.. 😭

PLEASE IF I DIE DO NOT LET HER NEAR ME OR MY FAMILY!!!! Do NOT BELIEVE HER FAKE CRIES!! Do NOT LET HER ACT IF SHE MISSES ME. SHE DIDNT WANT ME WHILE I WAS ALIVE & below in the YouTube video, was her last words to me when I called her to update her!!!!!!!

—SHE IS FULL OF CRAP IF SHE SHEDS ONE FREAKING TEAR OR ACTS OUT LIKE SHE DID AT DADS FUNERAL putting on a show like she cares! She could have SAVED HIM had she got him help yet she watched him lay in bed & DIE!!!! & she could have had a daughter & grandchildren had she not let me be abused, hurt, threatened, bullied & more.. but she wants to be the victim like we all abandoned her.. yet this was her choice of words to me while I battle COVID!! I wish I could say I was surprised but honestly I’m not.. she is sick… & she doesn’t want to see it because it allows her the attention she wants… she is such a narcissist.. however, this is a glimpse into my life.. & she wants me to stop telling my story & exposing her.. why because people are seeing her for who she is??? Oh..freaking… well…. Her & her snake friend both need to be exposed for who they are.. stop trying to hide.. the LIGHT will find your darkness… seems it’s already shining on you!

I knew it was a matter of when.. not if this hit us hard.. especially me… I can not even describe this.. especially with my already failing health condition.. but you know what is more disgusting... the fact that I used a portion of my energy to try to inform the vile woman who birthed me of my condition. It takes a lot out of me to even SIT UP in the bed, talk,  use the bathroom or even move at this point & I was stupid & made the mistake of thinking my “birth mother” might would care a little bit that I am super sick & could very well DIE because let’s face it Covid kills & my health is already poor.. & this is her response, not can she bring me anything? I mean not really shocked I guess.. why would the woman who has wrecked so much havoc on me already care? Why would she care if I died when she left me in her driveway having a nervous breakdown  after I was told I killed my dad & child and could have very well had a stroke or heart attack, why would she care when she fought with me in my hospital room after major surgery to the point of security being called on her while I laid on my back and couldn’t even MOVE! Why would I think she would care about me when she watched my dad lay in his bed and DIE… but I texted her anyway & this was her response to me: 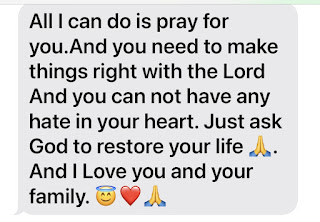 First of all… can we say hypocrite? I need to make things right with the Lord & ask Him to restore my life? How does she know where I am in life? When has she last saw me? Or be a active part of my life.. she doesn’t know anything about me or my life or my family for that matter & how can you love something or someone yet be less than 20 miles from and have pretty much ZERO contact with? Love is a action word! SHOW UP! Ughhh..
—
I am so sick y’all.. like seriously I don’t even want to move.. & I even called her today AFTER THAT HEARTLESS TEXT…because I am scared and it was another huge HUGE mistake… she once again proved she could care less and my death would bring her so much happiness & joy.. not to mention me being put in a body bag was the threat for me & my family so it would make them both happy for me to just flatline… just like my dad & son…she only cares about herself & those who provide her the attention she needs…
Again I want to say I’m shocked but I’m not.. it makes me throw up… I have never met someone more sick.. other than a mother who murders their child.. & well.. she’s all but done that with her tongue & actions…
THIS was her first words to me when I called to update her on my failing condition.
Who does this?? Deb Shedd. That’s who.
Was the message she got a death threat?
Because my family got body bag threats from Artie Jones Jr while she stood there & did nothing.
Was that message a message telling her she killed her dad and child? Because I was told that in her front yard by Artie Jones Jr & had a nervous breakdown & she did nothing.
Was that text message some of the ones I’ve got telling me she wishes I was dead & out of her life? Because she hasn’t cared.
But now that I am SICK. All she cares about is her & a message she supposedly got? I could very well die at any point, let’s face is life is short any of us could.. and this is her only words to me when I call her while I’m battling COVID!! This one takes it all.. just when I don’t think she could be any more demonic she comes with this. I treat my dog better than this when she’s sick.. I mean after all.. she watched my dad die.. so why would I think she would care if I died.. she would rather my death so she can throw herself another big pity party for attention..
If nothing else I hope all my posts, blogs, YouTube & videos prove just who she is and not one single person falls for her alligator tears.. trust me she’s the best at faking them!!!
Oh and she is apparently now taking the last 500 of the money my dad left for me as a way to hurt me financially. That’s fine.. no doubt karma will deliver to her & the charges she will face will be greater than the hell she wrecked on my dad & I.
Bloody hands mommy dearest bloody hands.
While I am here this was more of her words to me… & there is a whole story behind this.. wait until you hear how badly she treated me at my lowest.. even the messages between my husband & her while I was in a Alabama hotel ready to end my life… she can run but she can not hide!!!
This is why I’m in therapy on so many medications to deal with life.. WHO DOES THIS.. what mother tells their child they are about ready to blow their brains out?? WHO!?? & this isn’t the first time.. even my CHILD drove down to check on her after her threats of killing herself & he walked in SCARED TO DEATH because she was laying on the bed talking to some light she apparently saw like it was her mom & dad.. I was soooo pissed she put my child through that!!!!! So many just don’t know if the hell we’ve been through & she wants me to SHUT UP.. yup IM RIPPING EVERY PIECE OF DUCT TAPE off.
Y’all I have to go rest I literally can’t take anymore.. I wrote and fell asleep & lost a lot of what I wrote.. my body is exhausted & I could honestly at this point don’t even care.. every action of hers is a reflection of who she is & her judgment is coming.. I can’t even imagine how harsh it will be but I feel like it will be a million times worse than the hurt she’s caused me & that alone is scary! She had one job when God gave her a child, to be a mother & she failed.. she had one job to be a wife when God gave her dad & she failed.. bless her black heart.