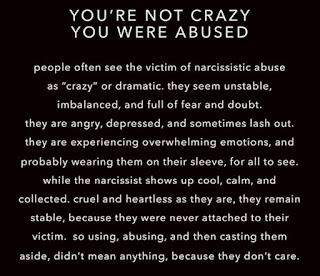 I am READY. I’ll be the “crazy one”… my body heart & health is exhausted carrying the abuse, hurt and trauma I’ve been living with.. hiding… covering up to “not hurt my mother” because she always made me cover up and lie about it!!!! Ughhh

It’s been a hell of a few days. Some big things are coming I have listened to more recordings than I even care to hear and completely disgusted that I even thought my mother would ever change.. hearing the hell I’ve been put through and reliving the horror of abuse plus reading my notes to piece it all for my book & the media including the sexual acts just to feed myself or meet at a hotel room and pretty much sell myself to have a bed to sleep in or as I lived in a friends empty apartment after she moved out, yet she kept it for me to live there because I was struggling.. I am just so upset that I ever hid the abuse thinking one day my “mother”? No my incubator / because a mother doesnt do this crap to their child/ would wake up and love me.. I gave her way more chances than she deserved..

yet I was the “sick one” did you hear the recording…

I was the fat lazy one. I was the one “full of the devil” my mother told me then denied.. I am uploading this recording for all to hear also.. y’all I am telling you what I am about to reveal is hard for me.. it’s VERY traumatic— but carrying it is also! —- plus some of the recordings are from family who has now passed but reminded me that my mother never cared.. & it’s very hard to hear, some is even of my mother telling someone who hurt me who I told her I never wanted to see again but she still brought them to my house & she also knew what this person did to other family members also.. then she sat in my front yard with him as she told him horrible things about me because she accidentally butt dialed me & my voice mail recorded her yet she denied it not knowing I had it — just like my aunt who asked if I was ever told I killed my child & dad & she was lied to.. but it was recorded… I wish so much I had more recordings from my earlier years, because as usual anything before I learned who she really is.. she denies.. heck she even denies what I have recorded. Or twists and change things to make herself look like she’s did NOTHING wrong..

Tonight I lost it. I am sick of the abuse being hidden.. I will be posting so much more now & I will be known as the crazy one…I’m sure because she has played the part & lied for so many years, while I am having reactive abuse to the hell & abuse I’ve have endured ALL MY LIFE…

.. while my narcissistic mother who is all calmly going to bed because she doesn’t care how horrible she’s been to me or how horrible “her maggot friend” has been… or the trauma and hell that’s been dealt to me & my children! It’s all been hidden away, money dangled over me.. (speaking of!) read below: & lies after lies…. All for show because we live in a small good ol boy town…

This happened in a “VERY” close connecting town; I honestly don’t know all the details but seems very odd to me. I can’t seem to figure out HOW this could happen.. but it raises a lot of eyebrows.. & definitely gives you a uncomfortable feeling..

“ Sublett, 52, was found dead Dec. 11, floating in the Frederica River, on the west side of St. Simons Island, with a gunshot wound to his head and his hands bound in front of him with a zip tie, used to band wires and cables. Police listed a packet of zip ties in an inventory of evidence found in Sublett's car that was parked nearby. They also listed numerous bullets and a gun holster, but no gun.”

Only to be ruled a suicide?

“ Mike McDaniel, special agent in charge of the GBI Kingsland office, which is leading the investigation, said the investigation is ongoing, even after the manner of death has been determined to be suicide.”

I am 🤯 mindblown. I legit can not wrap my head around this one.. but you know just listen to what my family has been through by someone in a public seat… it really makes you wonder.. & so many questions unanswered- so what gives?

Before I end, Let me add.. I posted my 0 bank balance in a previous post.. well... she gave me 100.00 to live on, one hundred dollars….to feed my family, pay my bills & get my medicine. After she took the money that is direct deposited into the account I had, that was suppose to have my name put on it but she has made every excuse and every lie to avoid it.. it was the money that has always been mine from my dad, was always available to me until I spoke out, she took it months ago so that she could get the satisfaction of me suffering & having to beg her for money so she could have power & control because that is who she has always been… so now every month as soon as  the deposit hits its transferred directly to HER acct all but a little bit then she waits for me to tell her I still don’t have enough and she puts 100 or 200 extra just to barely get me by but still remains in control…  🙄 sooooo.. she can wipe her ass on that 100.00 or donate it to the maggots campaign (if he does in fact run like she told he to get ready for a couple months because apparently he is) or even use it to prove I’m crazy, like she wanted to do with my dad & her sister.. & while I’m here..

But she left me laying in her yard having a nervous breakdown.

She sat across the court room with my abuser.

She left me at my sons funeral, didn’t even go to the church with me, after putting me through hell… because the pastors wife didn’t hug HER…

I’ll be the crazy one she’s made me out to be.. reacting from the TRAUMA, ABUSE & HELL she’s put me through or watched me go through— ALL MY LIFE.. while she plays victim, innocent & the good church going christian woman with “God on her side” she deserves an award for the best actress!