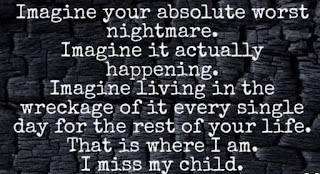 In about 16 days my absolute worst nightmare happened… & for 7 years it’s continued to haunt me… I’ve lived in a constant pain that can’t even be described.. no time has healed or made it better… no words have soothed it.. every.single.freaking.day. I have to decide if it’s even worth pulling myself out of the bed and carrying the weight of all the broken pieces of my child’s death… you just don’t know how hard it is unless you live in this nightmare also… in a few short days 7 years ago my water broke & my sons story began… I laid in a hospital bed, BEGGGGGGING for a miracle…. Watching & listening to his little heart beat on the monitors which was music to my ears, cherishing every kick & move that he made… & heavy tears streaming as I begged him to keep fighting with me & hoping this nightmare would end because he still had weeks before his little body was ready to meet me earthside… the odds were against us… & then it happened… my body had already failed him when my water broke.. & now it failed him completely & I had to have a stat c/section, I was all alone as my husband had to care for our other boys & work, I didn’t have anyone there to be with my boy when he was born & my worst fear that he would be born and die alone.. thankfully my husband made it JUST in time to let him know he wasn’t alone! I’ll never forget waking up in the recovery room and finding my husband beside me with tear filled eyes, he just said ”baby he’s so tiny!” I was super medicated but determined to get to him.. they got me up in a wheelchair and the halls seemed like forever but as I entered the NICU I saw the most tiny & beautiful baby boy… my heart ached sooooo bad.. I wanted him in my arms & ached to love on him… but he needed the machines & his  incubator to survive they said… (to be continued..) but I can tell you every freaking day of this nightmare I hear the words uttered to me that “I killed my child” & I have to really fight hard to put my feet on the floor every day & remind myself to breathe & that I have 2 other boys here who still need a mama although some days that doesn’t feel like enough since they are grown… then I remember I am also grown and how bad it hurts not to have a mama & I fight even harder to make it one more day….. 💔 these next few weeks will be the hardest on me.. I will fight for survival as my heart & body try to fail me because it just knows & I will relive every memory, every feeling, every tear, every smell, every single detail up until his very last breath & then every second of this nightmare for the last 7 years without him….  & question so many things that I could have done differently and had I not turned off his life support would he have REALLY made it.. EVEN tho his body was failing faster than the machines could even keep up.. BUT I wouldn’t not carry the words & guilt of “KILLING MY CHILD!!” Thanks to some stupid idiot, scum of the earth councilman who sits proud on a seat in the St Mary’s district who had my mothers support telling me I killed my child her own grandchild which clearly meant nothing to her like her other 2!!!!! 🤮